Extraterrestrial Doesn't Exist. Does it? Latest Opinion by scientist makes us question again.

Based on Star Trek: First Contact, and If The Universe Is Teeming With Aliens

Being a Star Trek movie, it is no surprise to assume that there will be a lot of new SciFi technology and surprises to be involved in such a movie. The movie Star Trek: First Contact makes use of many concepts that do not apply to date and those that will never seem to be plausible according to current physics. The concepts, such as inertial dampers, warp drives, time-travel, speeds above the speed of light, and wormholes although they make the movie sound more creative and fun, it has sometimes come to being criticized for the overuse of such concepts- some of which do not even agree with the physics of today.

For instance, according to the Special Relativity Theory of motion, no matter can move with or above the speed of light. Star Trek: The first contact clearly defies this concept, and although the existence of wormholes might somehow scientifically be possible( although we haven’t seen one in operation yet), it is still unknown to what extent and under what physical circumstances those holes operate.

One very important thing to realize about this and the whole Star Trek movie series is the present human nature(or behavior) of governance. In this movie, the presence of “a chain of command”, and in the other Star Trek movies, the presence of the United Federation of Planets clearly depicts the human nature of governance and organization, which in turn lures us into believing in the concept that all Extraterrestrial Life might be intelligent life. In a recent article published in Scientific American, a former NASA scientist, Gilbert V Levin, discusses that he is convinced on the presence of life in Mars(at least in the 1970s) claiming the Labeled Release experiment had a positive result, which in this case associates Extraterrestrial Life and Microbial Life.

Most movies associate Extraterrestrial Life with some intelligent, bipedal(which I believe, is a wrong assumption, most of the time), English-speaking organisms. That’s also the case in Star Trek: First Contact. The proper solution for this seems the Zoo Hypothesis from Stephen Webb’s book. The people on board in The Enterprise were trying to control the future of what was happening on Earth by somehow traveling into the past and trying to change some scenarios. It is depicted as if they are the ones deciding the fate of the Earth from the outside by involving directly. According to the Zoo Scenario, “The reason there seems to be no interaction between them and us is that they don’t want to be found—and they have the technological ability to ensure we don’t ﬁnd them. The zoo scenario involved the idea that advanced ETCs are simply observing us.” After the Enterprise “saved” the Earth from being conquered by cybernetic Borg, it seems like the people at Earth never knew what happened and continue their life as nothing ever happened.

As Stephen Webb explains, the Zoo hypothesis is somehow inapplicable as it is hard(merely possible) to prove. As Stephen says, “it leads us nowhere: it’s not a testable hypothesis.” The solution to Fermi’s paradox doesn’t seem to be easy to think of using a human’s mind. Watching SciFi movies, or reading those kinds of books persuades us into believing to the situation would be only like that and our views become very limited to thinking of Extraterrestrial life only on the basis that either a fleet of Alien Life is attacking us, or trying to use/steal the resources from Earth.

We hardly think of Extraterrestrial life in terms other than life forms based on Earth, that is, we have a hard and non-flexible definition of life that is based on carbon-based organisms that we seldom lookout for other forms of “life”. Extraterrestrial life could be of the form that we have never seen on Earth, made of elements that are not even available on Earth. Or in some cases, as the Labeled release experiment from 1970 showed, we could have Earth-like microbial life. It is always, I believe, wrong to generalize life only based on the only experiences we have had so far.

According to Fermi’s paradox, which actually makes sense, it is staggeringly amusing that we have not “discovered” life yet. Thinking about the vastness of the Universe and the variety it could harness, it is very illogical to assume that we are the only life in the whole universe. It is why some people believe that powerful organizations like the NSA, CIA, or governments in general hide information from the public. The assumption does make very good sense as people are from different backgrounds and would react very differently to the news. Also, if one powerful government discovered this, it would keep it a secret from other nations to have superior intelligence over the subject.

Another reason might be to protect the researchers and keep them safe as some might even start to work against the attempt to connect with the Extraterrestrial Life, similar to the situation in the movie Contact. It is why some people, whistleblowers like Edward Snowden, have searched for data about Extraterrestrial Life in the servers of these powerful organizations. On a podcast, Snowden was once heard saying that he “couldn’t find anything” adding “If it’s hidden, and it could be hidden, it’s hidden really damn well especially for people on the inside,” Snowden said.” It does seem like the government is not hiding anything, at least for now.

I believe we always tend to believe that we are the best- that the human race is the perhaps, the best in all the universe, and that we are the ones being “colonized”(movies and SciFi books tend to lure us into believing that) and that we stand for “peace”, and that we are on a “righteous” ground. If Extraterrestrial life exists, which, I believe, is very likely, we must have been through a similar set of situations and perhaps a similar source. After all, the universe was a tiny little thing. Every matter we can think came out of the same source, and it is very likely than not that we have the same source and we would have a similar set of situations now, too.

Some planets might be in their early years of development and so might life be. Stars are still being “born” every year and the planets that revolve around those start will likely harbor life. I tend to agree with the Panspermia theory, which argues that life is a form of “seed” and that “seeds are everywhere”. A champion for this idea could be comets that have organic materials(which are most of the time the starting material for life) in them and that the recent news that the Labeled Release experiment had actually discovered “life” on Mars. 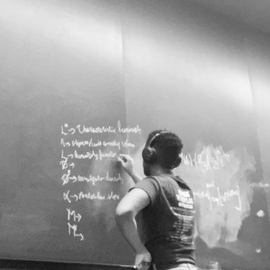